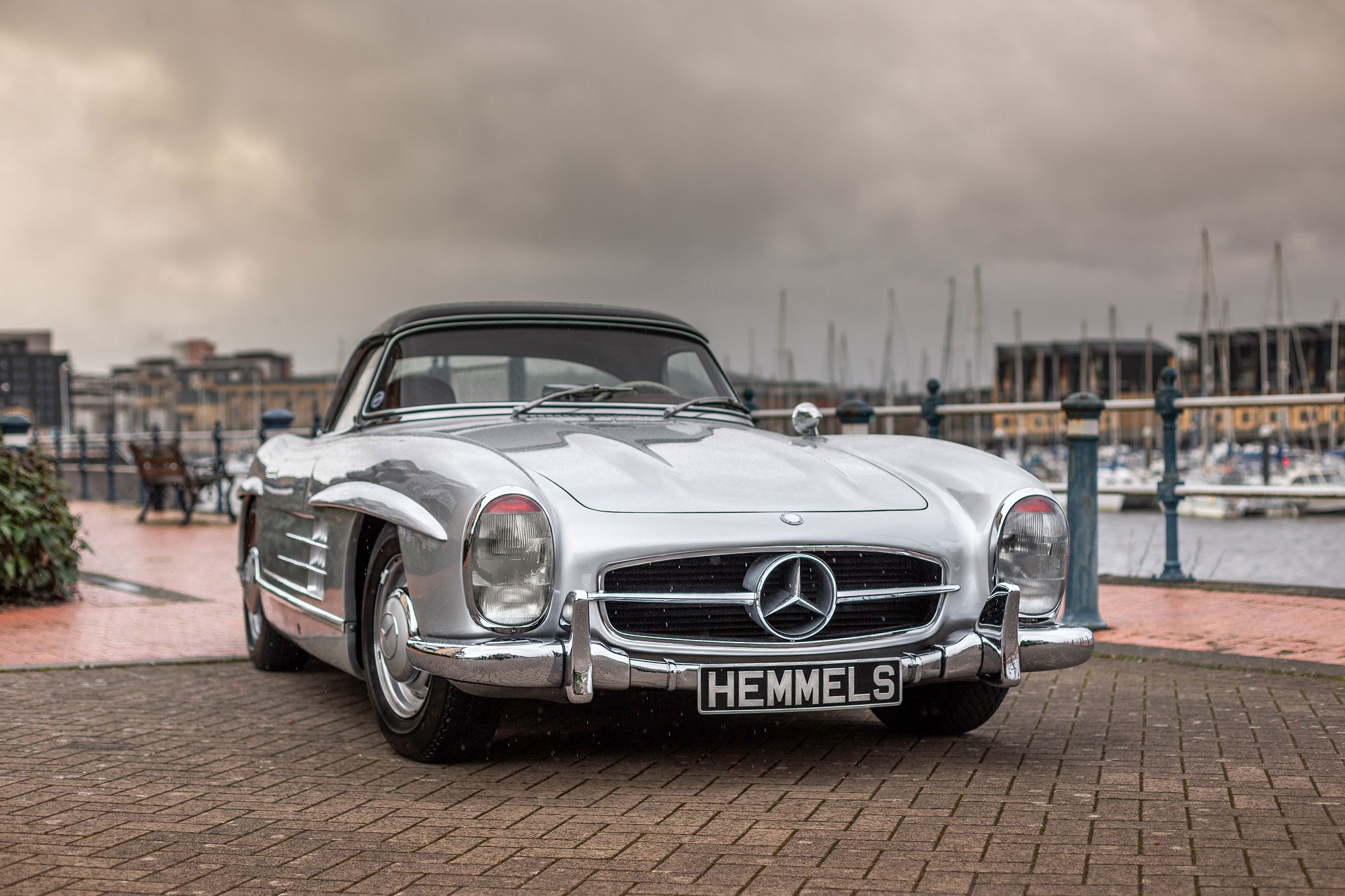 Imagine standing in a 1950’s Mercedes-Benz showroom, extending your hand to the salesman and ordering a new 300SL. That would be a moment to savor. The ownership of such an icon, new and pristine, would be an achievement to which few could have aspired, all those years ago.

Now that exclusive privilege is once again available for those who desire the very best in classic motorcars.

At Hemmels you can commission and acquire the most heralded car of the 20th century, sympathetically restored to be better-than-new and personalized to be as individual as you. 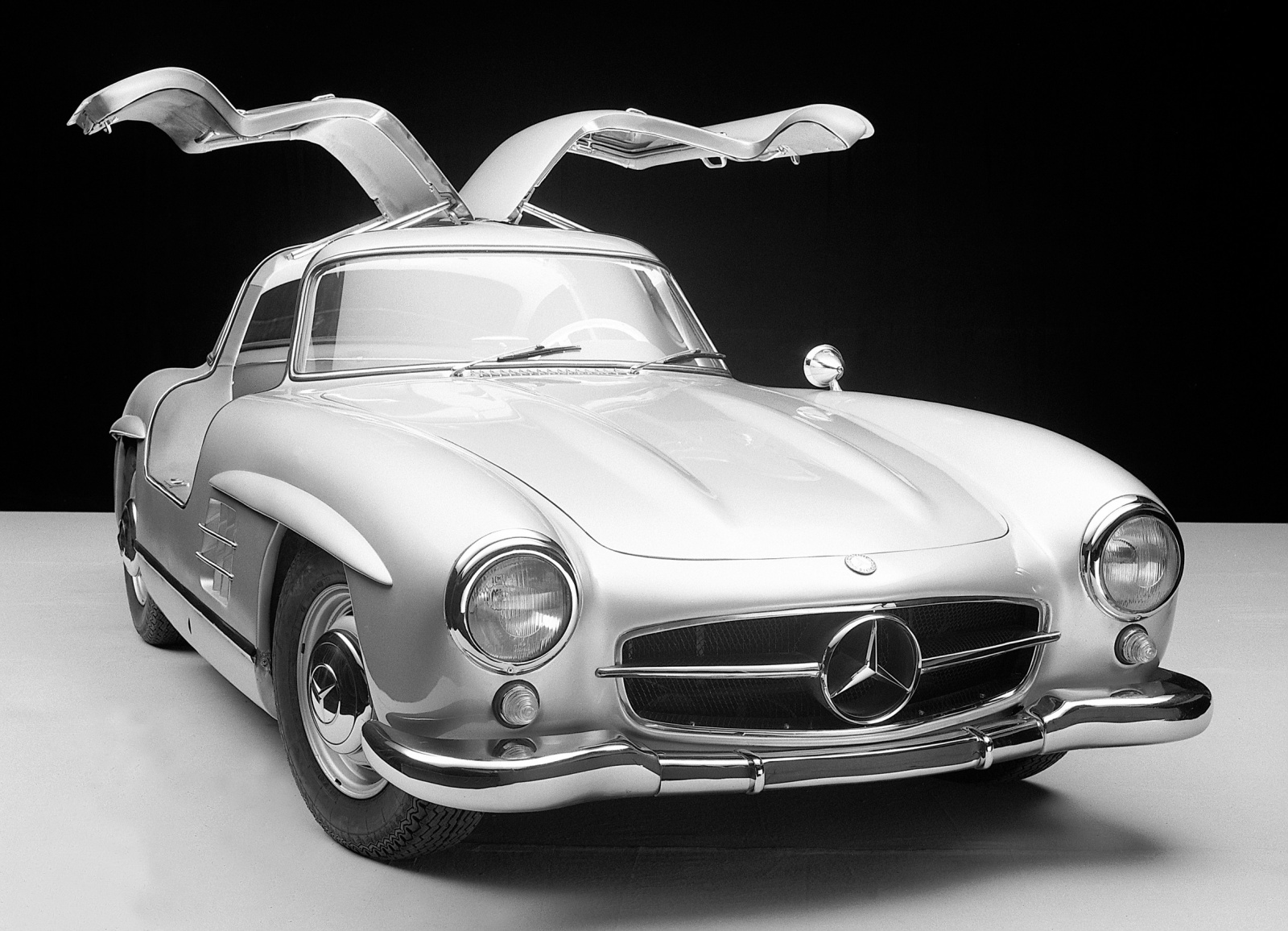 Since its unveiling the Mercedes-Benz 300SL has been revered as an objet d’art. Perhaps more of a head-turner today, it was a creation conceived when the pursuit of breath-taking design was the guiding light. That passion is the essence of our culture at Hemmels.

Our founding principles are based on uncompromising quality standards and the relentless pursuit of perfection. With a workforce of over 50 craftsmen and women and a custom facility uniquely designed for the restoration of the legendary SL series, there is no place quite like Hemmels. 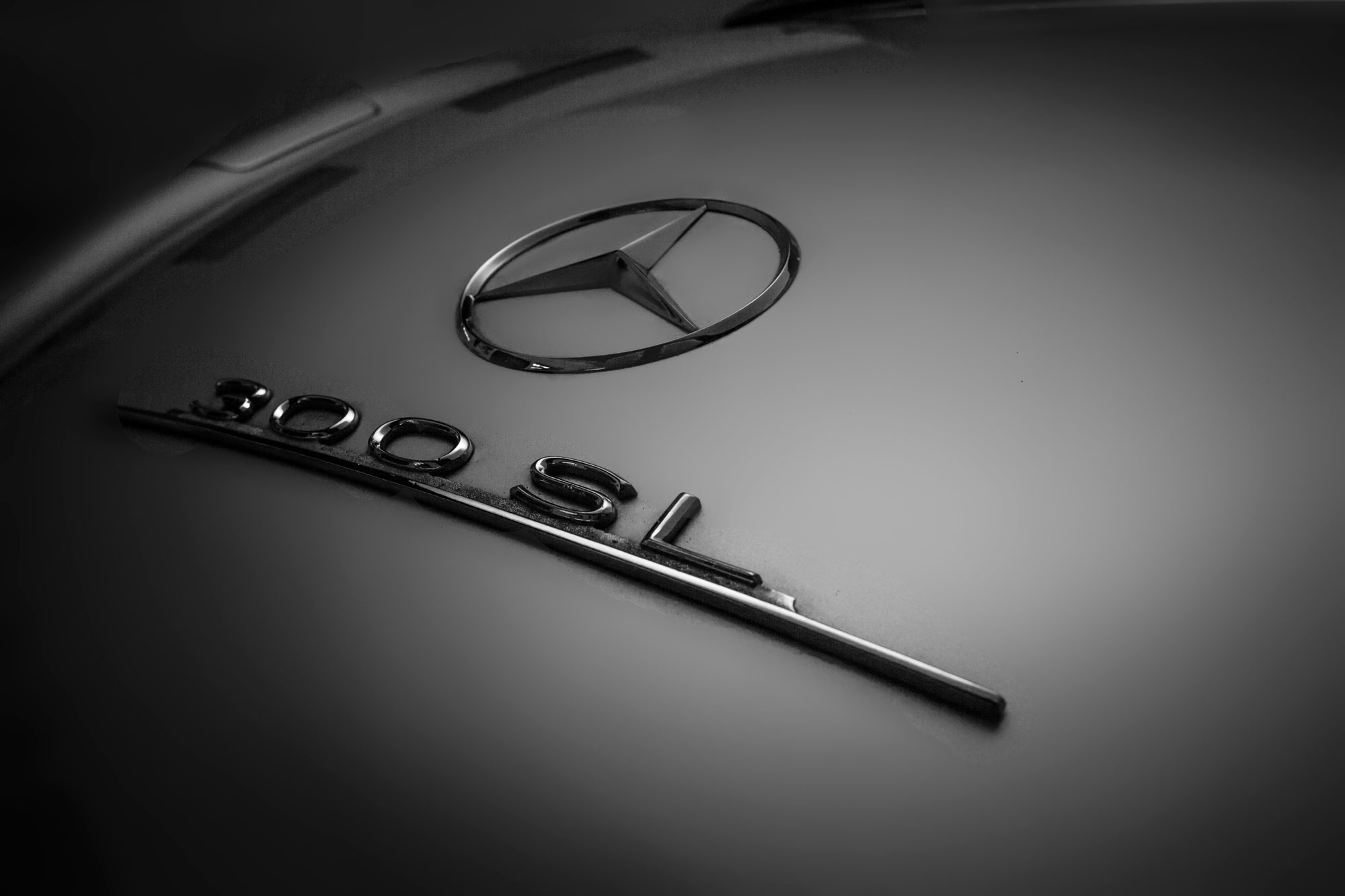 Its race car roots scarcely hidden by sleek lines and curves, the worldwide launch of the Mercedes-Benz 300SL was in New York – not Europe – as this was a car ideal for the open roads and boundless optimism of America.

Yet the 300SL styling was inspired by European refinement and taste, with elegant curves and graceful accents, while the Big 4 marques of the time explored tail-fin designs to capture the new dawn of the space-age.

The desirable Mercedes-Benz 300SL certainly won the hearts of notable owners. In Hollywood, Paul Newman, Clark Gable and Yul Brynner ripped up The Strip and added to their legendary status. In Europe, some of the most creative minds of the 20th Century – artist Pablo Picasso, director Alfred Hitchcock, and conductor Herbert Von Karajan – were also amongst the driving elite. 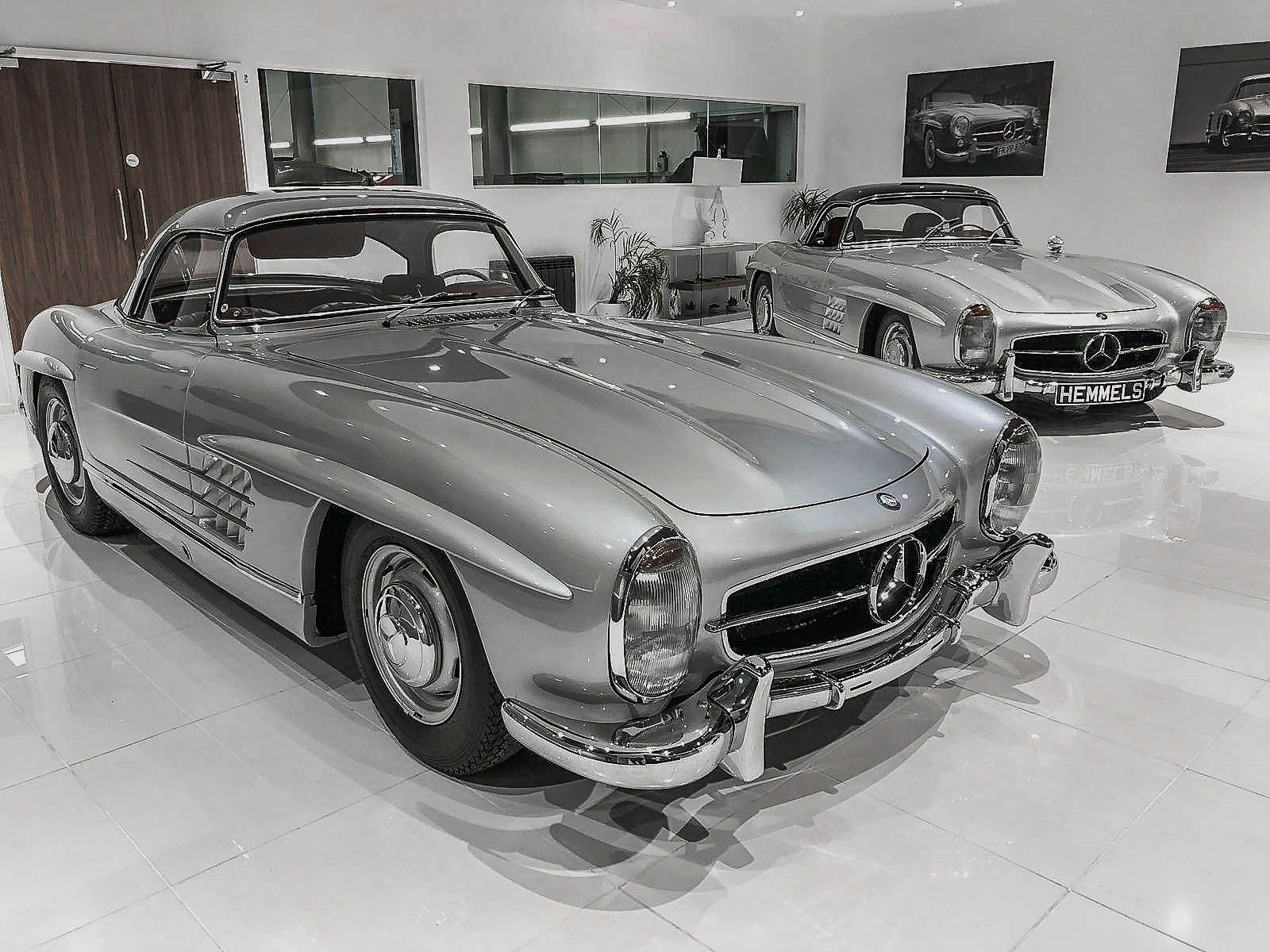 A Gullwing and a Roadster

Like the most valued treasures there is a rarity to the Mercedes-Benz 300SL that enhances both its appeal and value.  The first and most known version is the 300SL Coupe or “Gullwing”.

Since its introduction in 1954 just 1,400 models were manufactured until 1957 with the vast majority being ordered by affluent US buyers.

Sensing a shift in the demands of the American market for open road adventure, Mercedes-Benz introduced the 300SL Roadster with removable hardtop and fold-down soft top. Some 1,800 of these were manufactured until 1963, again with the majority going to the USA.

That the USA became both the place of launch and the most popular destination for the 300SL is no coincidence. The car was the brainchild of Max Hoffman, an influential car designer who convinced struggling Mercedes-Benz to enter the booming post-war USA market by taming their successful race car (also called the 300SL, confusingly) for the streets and aiming sales at the elite class of the era.

While the Gullwing doors were certainly a marketing focal point, these are an engineering solution to a fundamental problem. The 300SL race car was built using a lightweight tubular spaceframe which was rigid and durable, but not able to be easily modified to accommodate traditional doors without compromising structural integrity. The center-hinged “gullwing doors” are a necessity. Problem solved. Iconic status assured.

However there is certainly more to the enduring allure of the 300SL than its pop-up door party trick.  The team that ushered the car from endurance racer to avenue darling blended innovative engineering and style to create what many have called the world’s first supercar.

The front of the car is impossibly low and sleek being both manly and delicate at the same time. The engine is installed at a 50 degree angle in order to lower the front end profile while ground clearance is improved through the elimination of the oil pan in favour of a dry sump system. Under the hood the race car engine was replaced with the proven M198 straight 6 engine which was enhanced with pioneering direct fuel injection – a first for consumer cars - boosting power by 25%.

Compared to the race car body, the ventilation panels are elegantly styled to be more functional while the “eyebrows” over the tires channel away rainwater and add finishing touches to the body. Inside the makeover is unrecognizable from the spartan race car predecessor. The dashboard is be-jewelled with a tasteful array of instruments while a strip of chromed controls is framed with leather surround.  On the Gullwing, the steering wheel tilts to accommodate easy entry for the driver, while the Roadster’s modified spaceframe features lower sills along with its swing doors. Even the optional luggage was uniquely shaped to fit into the trunk or behind the seats.

Hand in hand elegance and engineering harmonize to achieve superb results.While the Gullwing doors were certainly a marketing focal point, these are an engineering solution to a fundamental problem. The 300SL race car was built using a lightweight tubular spaceframe which was rigid and durable, but not able to be easily modified to accommodate traditional doors without compromising structural integrity. The center-hinged “gullwing doors” are a necessity. Problem solved. Iconic status assured.
‍

Take a tour through the ancient towns, lush valleys and rugged coastline of Wales, on a fine Spring morning.

It is that blend of elegant design and breakthrough engineering that has fostered a timeless attraction to the 300SL. And though both the Gullwing and Roadster are immensely desirable today, as then, the rarity of availability also adds to the demand.

This year alone Rolls Royce and Bentley will produce more of their top sellers than all of the 300SL Gullwing and Roadsters ever built.  Residual value for a new luxury car is certainly not as lucrative as that of the 300SL with depreciation the result of endless new supply.

Born in an era where unbounded optimism inspired the collaboration of artisans and engineers to create arguably mankind’s most iconic automobile, the Mercedes-Benz 300SL debuted and has since kept rare company in terms of value or appeal.

And while there are opportunities to acquire a used Mercedes-Benz 300SL Gullwing and Roadster for sale in the general market, we invite you to commission your personal icon, hand-crafted to the world's finest standard.

Hemmels is committed to ensuring these iconic treasures are reborn, exactly as our clients have envisioned, ready for another century of admiration.